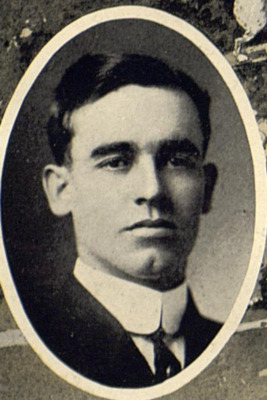 "What care I when I can lie and rest; Kill time and take life at its very best." It is very doubtful if any man has ever accomplished as much here under as adverse circumstances as our dear old lovable chum, "Dart." He has toiled many a weary year about the vicinity of Kentucky State and carries away with him the degrees of A. B. and LL. B., as a worthy crown of his labors. When Greenup County found herself in need of a representative this winter she turned with almost unanimous acclaim to Dart, and his splendid record at Frankfort has fully justified the implicit trust we always put in him.

Arthur Titus Bryson, Sr. (February 19, 1886 - April 30, 1959) was the son of James Donovan Bryson and Nancy Belle McAllister. Bryson received both an A.B. and an LL.B. from the University of Kentucky. In 1914, Bryson was elected to the state legislature as the representative of the 100th district. Bryson practiced law in Ashland, Kentucky after graduation. In 1938, Bryson was appointed the city corporation attorney for Ashland. He practiced for 45 years in Ashland before retiring to Florida. Bryson married Juliette Gaines in 1914. Bryson's son, Arthur Titus Bryson, Jr., also graduated from the University of Kentucky where he received his A.B. in 1938 and his LL.B. in 1940.