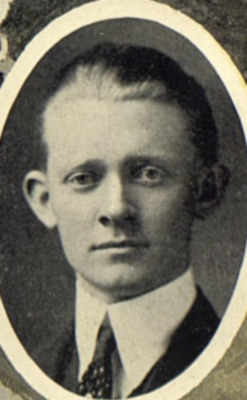 "The depth of his intellect is immeasurable." This knightly duke left the umbrageous village of Willow Shade in 1913, took State University by storm, lost his hair in the conquest, and. like Sampson of old, apparently had his ambition somewhat curbed by the aforesaid loss. But his ambition has revived in direct proportion to his new growth of hair and he pours forth his eloquence upon any and every occasion. Basil bids fair to leave the University with the greatest accumulation of legal wisdom ever carried away by any one man.

Basil Duke Sartin (April 16, 1893 - April 7, 1985) was born in Tompkinsville, Kentucky to John Wesley Sartin and Polly Jane Williams. Sartin received both an LL.B. and an LL.M. from the University of Kentucky. Sartin moved to Wichita Falls, Texas after graduation where he worked as a lawyer and attended the United States Recruit Training Camp there. In addition to working as a lawyer, Sartin served as a judge in Wichita Falls. During World War II, he served as a case analyst for the United States displaced persons commission in Europe. He was later appointed to a position with the Federal Security Agency. Sartin married Lillian Ward in 1920.