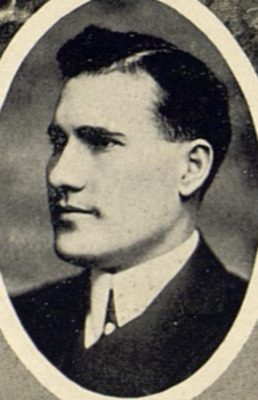 "No hasty fool of stubborn will, but prudent, cautious, pliant still." With his broad shoulders and mountainous frame it is but fitting that he should hail from Pike County, the largest in the State. But if his form and carriage are imposing, his mind is all the more so. Unlike the ordinary mortal who sees and thinks only within the limits of the microcosm, his thoughts are most at home within the realm of the macrocosm. Possessing with his many other virtues both tact and talent he truly merits the title of "A magnanimous man," but we have always wondered why he didn't play football sooner.

Duran Keel Tackett (January 8, 1890 - December 16, 1938) was born in Pikeville, Kentucky to Francis Marion Tackett and Anna Johnson. Tackett practiced law in Pikeville after graduation. Additionally, he worked as a postmaster. In 1923, Tackett returned to Lexington. He first practiced law before later working as an auditor for the Combs Lumber Company. Tackett married Fontella Cogswell.