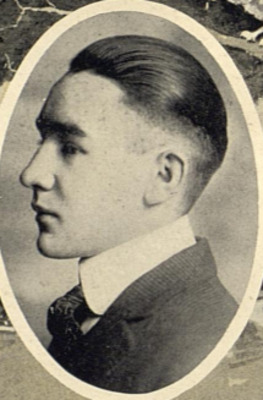 "Night after night he sat and bleared his eyes with books." "Dick" alias "General Shy," after roaming from Florida to Wisconsin decided on Kentucky State for his Alma Mater. We believe that he has the makings of a great lawyer within him, if he will only overcome that habit of being "shy." The "General" is some bear among the fair ones when attracted, but seldom falls for them. . His "dubinea" air always makes a hit, though, wherever he goes. Dick knows the law and never has to look it up, so that on several occasions he has put even Blackstone in the shade.

Guy Leslie Dickinson (October 19, 1892 - March 13, 1963) was born in Bell County, Kentucky to John P.A. Dickinson and Carrie Dishman. Dickinson practiced law in Barbourville, Kentucky after receiving his LL.B. from the College of Law. He also operated a fire insurance business. Dickinson was appointed several times as a special judge to try cases in various eastern Kentucky Circuit Courts where judges were not available. In 1948, Dickinson was appointed assistant attorney general for the Commonwealth of Kentucky. He served in this capacity until July 1952. Dickinson returned to Barbourville to continue practicing law after his resignation. In late 1961 or early 1962, Dickinson retired from his practice and moved to West Palm Beach, Florida. Dickinson married Consuelo Hayden between 1917 and 1919. Their son, Patrick Hayden Dickinson, graduated from the University of Kentucky College of Law in 1953.