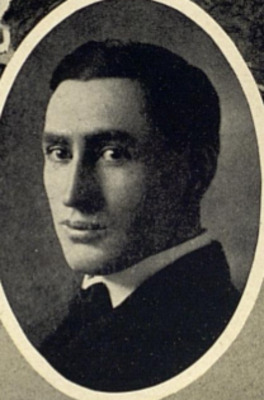 "He who knows, and knows that he knows, is wise." The name of this battle-scarred gladiator has been on the rolls of the University now for many years, during which time he has succeeded in talking the faculty out of a B. S. degree and unravelling the intricacies of the law to his own satisfaction. C. X. is a pugnacious and forceful speaker and the tangled threads of argument impede not the progress of his scrutinizing mind. Henceforward, the mountain town of Tallega will be prominent on the judicial map, because C. X. intends to have his office there.

Clayborne Xenophon Johnson (October 25, 1887 - January 9, 1957) was born in Wolfe County Kentucky to Thomas Crittenden Johnson and Eliza Jane Bowling. His father was an attorney in the Wolfe County firm of Johnson & Swango. Johnson returned to Wolfe County after receiving his LL.B. in 1914. He began practicing law and became the editor of the county newspaper. Johnson moved his practice to Lexington sometime between 1920 and 1930. He practiced in Lexington until his death in 1957. Johnson married Cora Susan Ward.