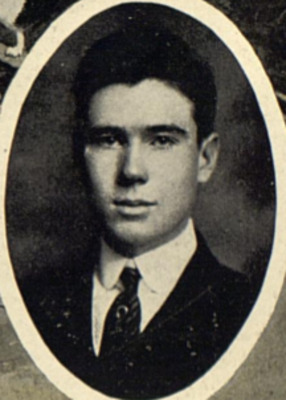 "Be it a weakness it deserves some praise, we cherish the playgrounds of our childhood days." King comes from Robards, Ky. He received his High School preparation at the Robards High School. He then wandered up to Indiana and for one year pursued the legal degree at Valparaiso University. But his yearning for his fatherland caused him to return to his Old Kentucky Home and to come to State to have the finishing touches put on him.

Arthur Leo King, Sr. (October 14, 1893 - March 20, 1982) was born in Robards, Kentucky to Arthur Lee King and Nannie Elizabeth Curry. He received legal education at Valparaiso University before receiving his LL.B. from the University of Kentucky. After graduation, King practiced law in Henderson, Kentucky where he eventually headed the firm of King, Flournoy, & Craig. He served as Henderson County attorney in the 1920s and as Henderson city attorney between 1938-1948. King also served terms in the Kentucky General Assembly (2 years in the state House and in the state Senate 1934-1938) and was appointed to the Kentucky Public Service Commission (1956-1959). King married Lucy Smith in 1927.