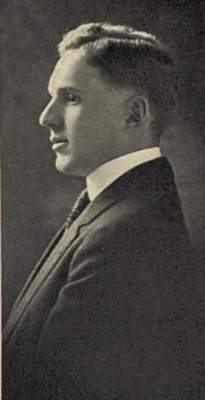 "Chop and there will be chips." "Breck" Mahan hails from Williamsburg, Ky. After graduating from Williamsburg Institute, he tried his hand as a "Knight of the Grip." Seeing that his persuasive powers were productive, decided to use his "grip" on the law. As he was reared in the mountains of Ky. his running gear was so frequently oiled with the pure and unadulterated corn juice that he grew to be quite a husky fellow, but used his strength to a good cause, leading the Barrister Basket Ball boys on a winning spring through Ky. and was not defeated by any department at State.

Thomas Elmer Mahan (September 18, 1891 - November 1, 1976) was born in Whitley County, Kentucky to William Melton Mahan and Louisa Archer. Mahan first attended the Williamsburg Institute before attending the University of Kentucky. Mahan returned to Williamsburg to practice law. In addition to his legal practice, Mahan was involved in several coal companies including the High Splint Coal Co., the Gatliff Coal, Co., and the Mahan-Ellison Coal Co.. Mahan was a trustee for Cumberland College and also acted as the college's attorney. Mahan served in both World Wars and attained the rank of Major. Mahan married Una Lee Moss Gatliff in 1917.