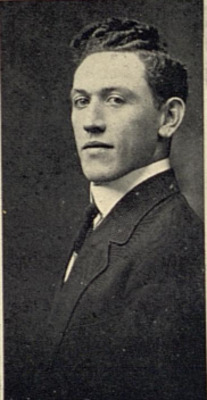 "He draweth out the thread of his verbosity, finer than the staple of his argument." The pedigree of this curly-haired youth, reaching back through his sojourn at Ilion High School and Central University, at which institutions he acquired innumerable honors, is one of the most diversified that has come under our notice. At Central he was enrolled in the Law College, a member of the Deinologian Literary Society, represented the University in the Inter-collegiate Oratorical Contest in 1912, and was on the Varsity Baseball Team. Due to the fact that he has been with us only a very short time he has not come very much into the limelight. We are sorry that we have not had the pleasure of a longer acquaintance with him,, but we feel assured that he will attain distinction in his chosen profession.

Justin Layman Doyle (December 6, 1889 - September 28, 1988) was born in New York to Arthur Doyle and Katharine Kehoe. Justin Layman Doyle attended Centre College (then known as Central University) in Danville, Kentucky between 1911-1912 before receiving his LL.B. in 1913 from the University of Kentucky. He was active in debate and oratorical contests at both schools. Doyle returned to Ilion, New York to practice law. In 1917, he attended an officers' training camp at Fort Niagara. Doyle was stationed at Camp Travis, Texas and Camp Perry, Ohio during World War I. After the war, Doyle began working in sales. He lived in Texas and Colorado before eventually settling in Fort Wayne, Indiana. Doyle married Ruth Ann York in 1928.