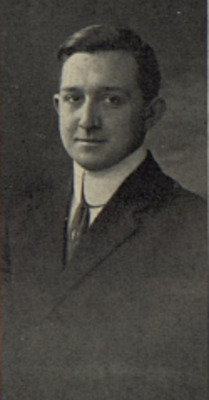 "Nobody loves a fat man." "Puss" is from Watsonville, California. Formerly of Louisville, he finished his high school work in Watsonville. Last year "Puss" went to Transylvania where he earned fame in football and his beautiful cognomen. This year, realizing that his marvelous ability was not appreciated sufficiently, he came to K. S. U., where he has been making friends at a strenuous rate. "Puss" has also ability as a basket ball player, which was clearly demonstrated on the trip through southern Kentucky with the Law Team. '' Puss'' may be only his nick name but believe me he's a cat.

Dailey Shearer Stafford (April 4, 1891 - April 28, 1953) was born in Warsaw, Kentucky to Daniel Flurry Stafford and Mollie Lee Shearer. The Stafford family moved to California in 1907. Stafford returned to Kentucky to attend Transylvania University. He then transferred to the University of Kentucky where he received his LL.B. in 1913. Stafford moved back to California and began practicing law in Covina. Stafford served in World War I and then studied at Sorbonne University in France after the war's end. While in France, Stafford attended the 1919 American Legion caucus in Paris--upon his return to California, he organized a post of the American Legion in the upper San Gabriel valley. In addition to his legal practice, Stafford served, at times, as the city attorney of Covina and Baldwin Park. Stafford also served as police judge in Covina and as a judge in the Los Angeles County Superior Court. Stafford married Vivian Gane in 1924.