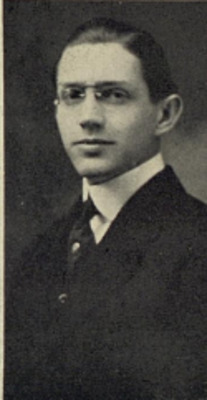 ''There are fools who kiss and tell, The poet hath wisely sung, Man may hold all sorts of posts If he will only hold his tongue." "Jimmy"' is noted for his conservatism in speech. His inexhaustible supply of good humor, his attractive personality and his ability to make friends, has made him the friends of both sexes, particularly the fair sex. The esteem and love of his classmates and comrades is portrayed in the fact that he was chosen editor-in-chief of the first publication of the Law Department, of our University, known as '' The Kentucky Law Journal.'' We predict for "Jimmy" a very bright future as a lawyer, but we "Fear" that his diplomacy will carry him into the service of our nation as a diplomat.

James Dunn Sory, Jr. (November 22, 1891 - April 26, 1935) was born in Robertson County, Tennessee to James Dunn Sory, Sr. and Sallie Long. Sory began practicing in Madisonville, Kentucky after receiving his LL.B. Starting in 1916, Sory served in the Mexican Border War as a member of the Kentucky National Guard. Sory then served in World War I in different capacities: as commander of the First Battalion 141st Infantry, assistant chief of staff of the 38th Division, and assistant division inspector of the Fourth and Second Divisions. Sory returned to Madisonville in 1919 and again practiced law. In 1922, Sory became the secretary of the Kentucky Disabled Ex-service Men's Board. He served in this role until his death in 1935 from tuberculosis.