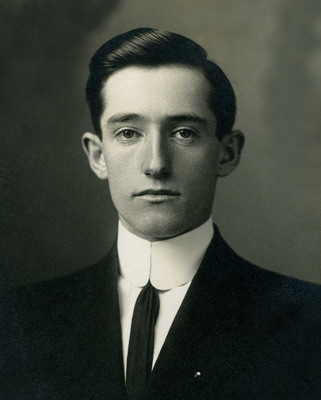 "For love had touched his heart."

"Jimmy" - a knight of the downy couch - was once known to rise from the appealing softness of his pillow before Eleven A.M., but the experiment was almost fatal and the dear boy never tried it again, since for the sake of some unfortunate maiden down in Mason he must take good care of his health. A very sentimental youth is he, as one might judge from the above sentence. Here's wishing her good—and, naturally, that includes Jimmy.

"And the lawyers smiled that afternoon, When he hummed in court an old love tune."

After graduation from the College of Law, Rees moved to Saskatchewan, Canada and started a wheat farm. He served in the US Army during World War I and returned to Mason County when the war ended. He began a farm in Mason County. In the 1940s, Rees moved to Indiana and operated a golf course. Rees was married twice--he divorce his first wife, Mary Inlow Pyles, in the 1930s and married Doris Eileen Koch in 1936.

Rees did not practice law; however, his brother, William H. Rees, served on the Kentucky Court of Appeals and was, at one time, Chief Justice of the court.