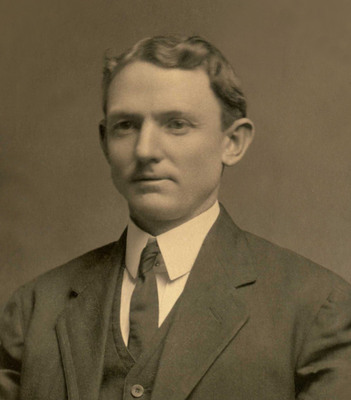 "Judge" came to us first from the pine-clad mountains of old Pulaski, and then from the Halls of the Kentucky Legislature. Neither place seems to have seriously impaired his ability to wax eloquent on most any subject, from the beauty of the Kentucky statutes to the whereabouts of Judge Chalkley's pencil, and the virile, forcible language which he has been known to use concerning both of these subjects stamps him as a coming leader in the ranks of the G. 0. P'.

"The string of his tongue was loosed and he spake plain.''

Matison Greenleaf Colson (May 24, 1878 - April 18, 1953) was the son of William Tinsley Colson and Elizabeth Jane Warren. Colson was admitted to the bar in 1904. He was a judge in Pulaski County and taught in schools there. Additionally, Colson represented Pulaski County in the Kentucky General Assembly prior to attending the College of Law. Colson later practiced law in Pineville, Kentucky where he also served as county attorney and circuit court clerk.