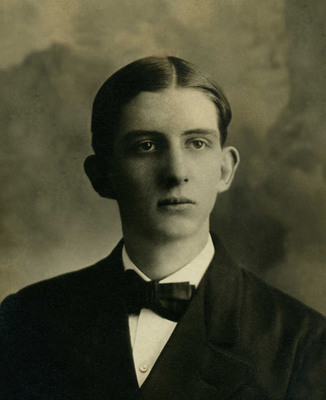 "Mac" is one of those serene individuals who thinks twice and does not speak at all. Joy, anger, love, hate — all these emotions may or may not have been felt by him, his closest companion cannot tell, but if they have, their effect was so slight or his control so great that the calm peace overspreading his beatific countenance was never disturbed. He came from Georgetown — "loveliest village of the plain" — and perhaps that explains it all.

"The great silent men, they are the salt of the earth."

McDowell Addington Fogle (June 22, 1888 - November 26, 1960) was the son of Jesse Edward Fogle and Lelia Addington. Fogle's father and his grandfather (also named McDowell Fogle) were both judges in western Kentucky. Fogle first attended Hartford College and Georgetown College before pursuing his legal education. He took a law course at Harvard University before attending the State University of Kentucky. After graduating from the College of Law, Fogle joined his father in the Hartford firm of Fogle & Fogle. Fogle was editor of the Hartford Herald and the Ohio County News. He wrote many articles on Ohio County history which were published posthumously in Fogle's Papers: A History of Ohio County, Kentucky. Additionally, a room in the Ohio County Museum was named the McDowell A. Fogle Memorial Library Room in 1976. Fogle married Cleon Augusta Genung in 1922.