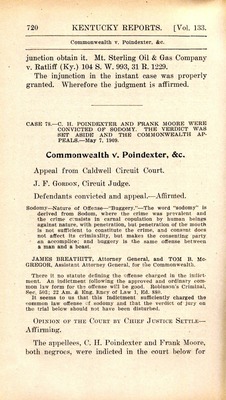 Commonwealth v. Poindexter, 1909 : C. H. Poindexter and Frank Moore were charged with sodomy in Caldwell County, KY. The men pled guilty and each was sentenced to 2 years in prison. Their attorney realized that the men were not engaged in the act of sodomy, as defined by the law, and requested a new trial. With the second trial, Poindexter and Moore were freed of all charges. The Commonwealth’s Attorney disagreed with the men being freed, and filed an appeal. The appeal was lost when the Kentucky Court of Appeals agreed with the Caldwell County Circuit Court and the men were cleared of all charges. [UK NKAA Database link http://nkaa.uky.edu/record.php?note_id=3092]

The document of this case is downloadable as the additional file listed below.