India Through the Eyes of Ellen Churchill Semple

The Throne of Dewan Am in Fort Delhi 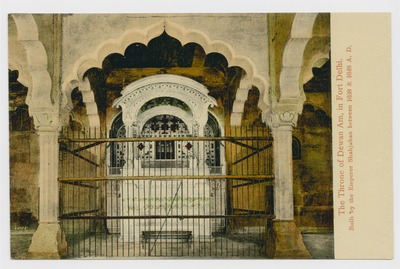 The Dewan Am is the Court of Public Justice (or hall of public audience) where the emperor administered justice on a daily basis. Here the emperor examined the parties and rendered the sentence which was executed immediately. The Dewam Am is located in Fort Delhi (also known as the Red Fort) built by Shah Jahan between 1638 and 1648 when he moved the capital of his empire from Agra to Delhi (a city that he called Shahjahanabad). The Red Fort (Lal Qila) is considered to be better planned than Agra Fort and was the seat of the Mughal Empire for approximately 200 years. The Red Fort was made a UNESCO World Heritage Site in 2007.

This work is licensed under a Creative Commons Attribution-Share Alike 4.0 License.