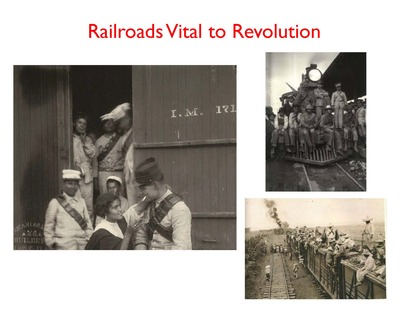 During the regime of Porfirio Díaz, the nation made great strides in constructing its infrastructure: railroads, roads, ports, bridges, telegraphs, and telephone lines connected its numerous regions, previously insulated by Mexico’s majestic and imposing mountain ranges. While Mexico had only 600 kilometers of railroad track in 1876, by 1910 it had over 19,000 kilometers of railroad lines that crisscrossed and integrated the country. Consequently, the railroads emerged as vital means of communication for the transport of troops and their control was hotly contested. Soldiers and their female companions road on top of the cars, while the cavalry’s precious horses road inside the boxcars.