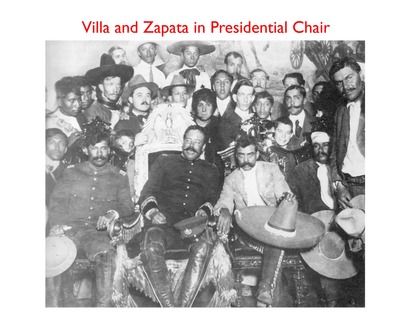 Once Huerta has been defeated and exiled in July 1914, Zapata came up from the south and Villa moved in from the north to occupy Mexico City. Thus, the nation’s capital was teeming with Zapatista and Villista soldiers whose presence caused terror among the urban elite and middle classes. Once in the city, Zapata and Villa headed for the national palace and had themselves photographed sitting in the presidential chair. This was the highpoint of the peasant phase of the Revolution. Nevertheless, neither of them aspired to the presidency nor did they covet national power; their grievances tended to be local concerning the people who followed them. They soon abandoned the Mexico’s capital; Zapata returning to the south and Villa to the north. This permitted the General Álvaro Obregón to occupy the city with his Constitutionalist troops.