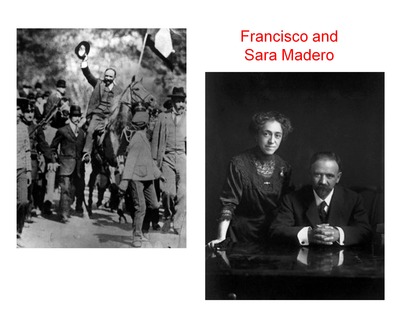 Francisco Madero was a wealthy and progressive hacendado (large landed estate owner) from northern Mexico, who had studied modern agriculture in both Paris, France and Berkeley, California. He published a book, The Presidential Succession of 1910, that criticized corrupt politics and the lack of a system of political succession, which became very popular. He later campaigned throughout Mexico for the presidency against Díaz and received considerable support. Díaz did not consider him a serious threat but he did imprison him during the 1910 presidential election. When Díaz triumphed through another fraudulent election, Madero then fled to the United States and called for Revolution via his Plan of San Luis Potosí (October 1910). Article 3 of this plan seemed to promise peasants that the Revolution would help them to retrieve their lands which had been appropriated by local landowners. This article encouraged many peasants and their leaders to join the Revolution. However, after the victory of the Maderista Revolution in 1911 (here we see him triumphally arriving in Mexico City in June 1911), and when he was elected president in November 1911, Madero did not act on this promise. Supporters of the old regime rose up against Madero in a Counterrevolucion in February 1913. He and his wife Sara were very close and she always acted as his adviser.