UKnowledge > College of Arts & Sciences > Passport to the World > ¡Viva México! > Writings of the Aztecs, Mixtec and Maya > 3 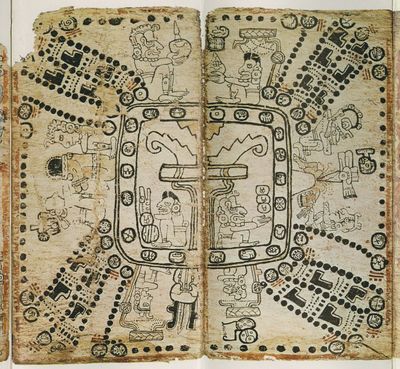 This cosmogram from the Madrid Codex provides a Maya vision of the quadripartite cosmos, similar to that on page 1 of the Aztec Codex Fejérváry-Mayer. At the center two creator deities sit to either side of the central world axis. They are encircled by glyphs for the 20 day names in the 260-day sacred almanac, called the tzolkin by Maya scholars. At the four cardinal directions paired deities make offerings. Between the offering scenes footprints move toward the center. Recent scholarship suggests this cosmogram incorporates the 365-day haab cycle as well as the tzolkin, and that it may represent the 52 years of the Calendar Round.

Paxton, M. (2001) The Cosmos of the Yucatec Maya: Cycles and Steps from the Madrid Codex. University of New Mexico Press, Albuquerque.