UKnowledge > College of Arts & Sciences > Passport to the World > ¡Viva México! > Writings of the Aztecs, Mixtec and Maya > 13 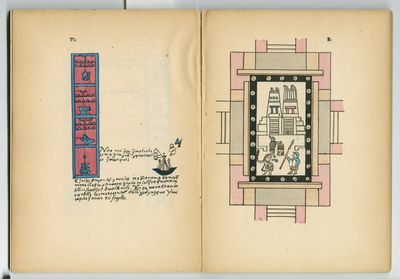 The Codex Aubin is a colonial period text bound in the European style. One of several central Mexican annals of the period, it offers a year-by-year account of the twelfth-century wanderings of the of Aztec tribes from their homeland in Aztlan, the imperial history of Tenochtitlan, and the events of the Spanish Conquest up to the arrival of a new viceroy and archbishop to Mexico City in 1607-1608. In Mesoamerican calendars, years could only begin on one of four of the twenty named days in the 260-day calendar, and the combination of that day name with the day’s number from one to thirteen specified the year within a 52-year Calendar Round. The red blocks on the left-hand side of the page contain the year-beginning dates, 11 Flint Knife, 12 House, 13 Rabbit, read from top to bottom. The Nahuatl language entry for the last year on the page, 1 Reed (A.D. 1519), records the arrival of the Spanish in their three-masted ship. On the facing page, an Aztec and a Spanish warrior brandish weapons in front of the twin temples of the Aztec Templo Mayor in Tenochtitlan.