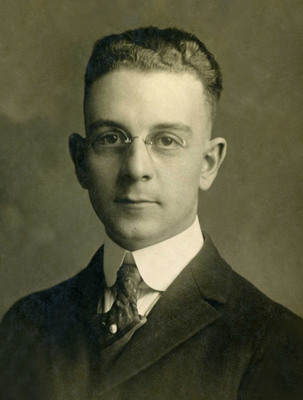 Tradition hath it that this modern knight-errant is a descendant of the "Little John" who scouted with Robin Hood in Sherwood Forest. He is as ambitious of military prowess as the "Little Corporal," his physical prototype, albeit as modest as a maiden, and has a disposition as sunny as his voice is gentle. The girls say he is "awfully cute," and as for him—well, remember the Prom. She lives "up in our country." One warning we whisper to her: "Watch John when he returns after conquering Potsdam, lest he rival the Hobson of '98 as the cynosure of female eyes, the lode-star of female affection."

John Stewart Sherwood (September 19, 1895 - December 3, 1964) was born in Ewing, Kentucky to Samuel Lee Sherwood and Caroline Ficklin. Sherwood practiced law in Cynthiana after graduation. He later moved to Washington, D.C. to work as an attorney for the United States Department of Justice. Sherwood married Bernice VanHook.