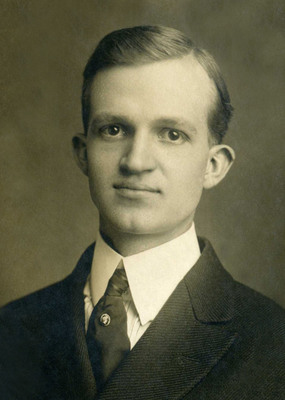 Virgil, the silver-tongued orator, the boy orator of the Pennyrile, whose utterances will linger about us as the perfume of roses. None the less flowery was the path of his triumphial procession from his undaunted loyalty to his Freshman fellows to their honored leadership in his Senior year. The friend of the Old Guard, yet the only unanimous Class President in the history of the university. As an unequalled politician, he must be referred to as a diplomat of no mean ability. The very reincarnation of Jeffersonian democracy and Kentuckian eloquence, Virgil must be considered an heirloom of the glorious past. With a deep insight and admiration for the law, he is ever independent and fearless. Long live the President!

Virgil Munday Chapman (March 15, 1895 - March 8, 1951) was born in Simpson County, Kentucky to James Virgil Chapman and Lilly Munday. Chapman first practiced law in Irvine, Kentucky after graduation. He served as Irvine city attorney between 1918 and 1920. Chapman then moved to Paris, Kentucky and began practicing in the Lexington firm of Franklin, Talbott, & Chapman. Chapman served as Kentucky's 7th Congressional District representative in the United States House of Representatives for multiple terms (1925-1929; 1931-1935). He also served several terms as the representative of the 6th District between 1935 and 1949. Chapman successfully campaigned for United States Senate in 1948. His term was ended prematurely when he died in an accident in 1951. Chapman married Mary Adams Talbott in 1920.