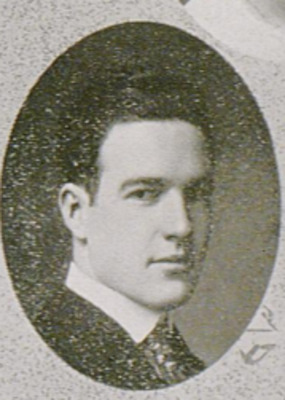 That's true; do you want me to tell you why? When the class was looking around for an honest, energetic man for Business Manager of the Kentuckian, Cullen was first choice. He hopes some day to be able to hand down wise and just decisions from the Supreme Bench. His method is to "hew to the line and let the chips fall where they may."

Robert Emmet Cullen (November 15, 1894 - October 15, 1918) was born in Flemingsburg, Kentucky to John Cullen and Winifred Comer. Cullen returned to Flemingsburg to work on the family farm after graduating from the University of Kentucky. Cullen enlisted in the United States Army in 1917 and entered World War I as a Sergeant in the 64th Coast Artillery Regiment. Sergeant Cullen succumbed to disease on October 15, 1918.