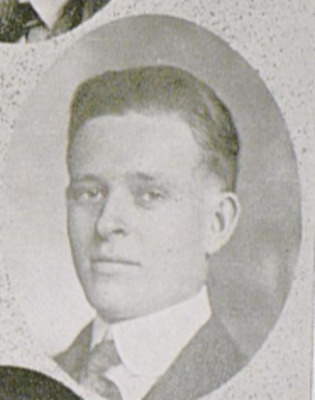 Joe is well known as the man with the melodious voice. It is quite certain that this will place him in a high position some day. Good natured, sympathetic, studious, and reliable, he has made his presence felt while on the campus and has won many friends.

Joseph Edmond* Torrence (March 24, 1894 - October 9, 1965) was born in Colorado Springs, Colorado to James Findlay Torrence and Jessamine Peckover. Torrence briefly worked as a lawyer before serving in the first World War. He returned to the University of Kentucky after he was discharged and worked as an Assistant Professor of Military Science. Torrence resigned from that position in 1925 and resumed his legal practice in Eau Gallie, Florida. Torrence later worked as a real estate agent. He also served as the mayor of Eau Gallie at one time. Torrence married Martha Dee Rigg in 1917.