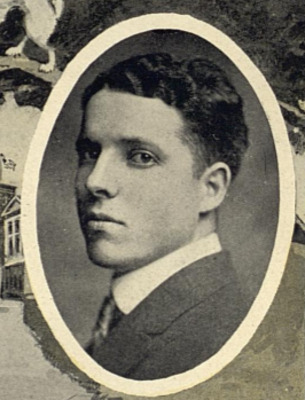 "Friend to Truth; of soul sincere, in action faithful, and in honor clear." Should anyone inquire who is the best natured, best looking and possessing the sweetest voice in the Senior class, the answer would be unanimous--"Bill Woodson." Not only is "W. T." in the lime-light of social circles, but he is as active in his studies as in executing the tango. One might think that "W. T." was studying for the ministry, but in fact, he is aspiring to the dignity of a Judge. So he is contemplating returning to Knox county and displaying his knowledge of jurisprudence in handing down opinions on mountain feuds.

William Thomas Woodson (December 24, 1888 - November 15, 1972) was born in Knox County, Kentucky to William Silas Woodson and Sarah J. Baughman. Woodson worked as public school teacher in Knox County before attending the University of Kentucky. He received an A.B. degree and an LL.B. degree from the university. He then moved to Morganfield, Kentucky where he practiced law and worked as a deputy county clerk. Woodson later moved to Chicago, Illinois where he practiced law with a focus on copyrights and trademarks. Woodson retired in 1968 and returned to Morganfield. He married Mildred Cobbs Flournoy.