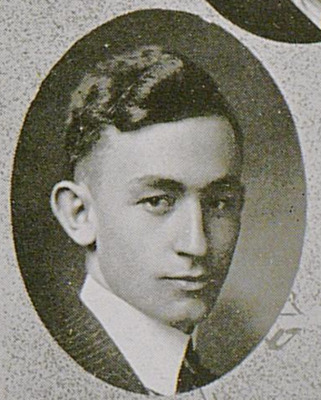 "Fritz" is an all-round good man. He is already a lawyer of considerable note, having practiced two weeks while in college, and among many other things he saved a man from wearing the stripes.

Frederick Ambrose Harrison (July 17, 1893 - September 17, 1949) was born in Grant County, Kentucky to John Morgan Harrison and Katherine Ruhall. Harrison returned to Grant County after receiving his LL.B. He practiced law there for 31 years. He served as a county judge for four years. Harrison also served as a senator in the Kentucky General Assembly between 1934 and 1936. Harrison was married twice--his wives were Marguerite Webb (m. 1916, d. pre-1932) and Rose Ford Ward (m. 1932).