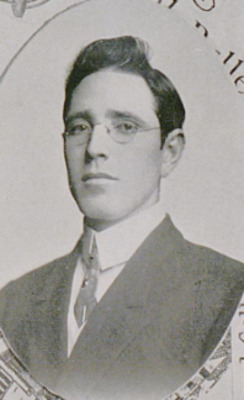 Bachelor of Science in Education. No achievements. Elliott is the only man in the class that was able to beat the military department. Entered as Normalite. He has a special liking for "Tutmose's" department and is taking post graduate work in History. A universal, unitarian crusher, and was once seen at the Hipp with a strange damsel.

Alvin Clarence Elliott (January 7, 1883 - June 14, 1962) was born in Eubank, Kentucky to Simon Thomas Elliott and Mary Belle Floyd. Elliott was a public school teacher before attending the University of Kentucky. Elliott received three degrees from the University. Elliott did additional coursework at the University of Chicago. Elliott worked as superintendent for schools in Sand Springs, Oklahoma. Around 1930, Elliott moved to Tulsa and began practicing law. Elliott married Verna Viola Windsor in 1919.