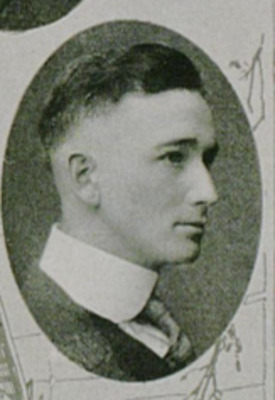 "Patterson Hall! Where is it? What do they teach there? When a lawyer goes in for real-estate--hold tight." "Little Willie," one of the few youths whose springtime fancies have never carried him into the unfathomable mysteries of Patt Hall. No, he is not immune; on the other hand he is a "very much" ladies' man; however, the University-Lunch-Stand-Girls do not hold out any attraction for him. "Willie" says that he does not intend to practice law after graduating, but that he will go into the real-estate business "Out West."

Harry Croft Williams (July 29, 1893 - November 22, 1961) was born in Arkansas to Byron Demetrius Williams and Charlotte Elizabeth Woodruff. The Williams family moved from Arkansas to western Kentucky prior to 1900. Williams did not practice law after receiving his LL.B.. He worked as a clerk for an energy company in Logan County and a manager for a mining company in Christian County before moving to Chicago, Illinois in the early 1920s. Williams worked as a manager and accountant for an automobile agency in Chicago. He moved to Houston in 1940 where he operated a shutter and louver manufacturing company. Williams married Selma Martha Archer in 1921.