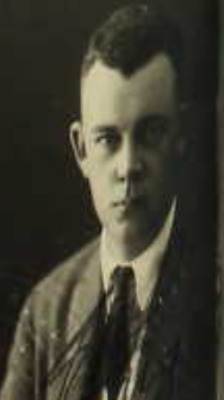 Gustavus Adolphus Rice (August 28, 1893 - March 1969) was born in Harlan, Kentucky to Henry Clay Rice and Elizabeth Neal. Rice moved to New York City after graduating from the University of Kentucky College of Law. He became a banker with the National City Bank of New York. In addition to working for the New York City branch of the bank, Rice worked at three of the banks international branches in the late 1910s and early 1920s (the Petrograd, Russia branch, the Moscow, Russia branch, and the Pernambuco, Brazil branch). Rice returned to the United States in 1921 and continued to work in the New York City branch of the bank. Rice married Virginia Moore in 1917.

*Mr. Rice is not listed in the 1915 edition of The Kentuckian.