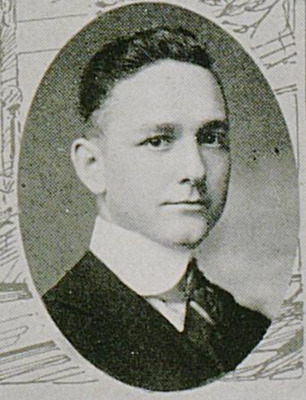 "I have a heart with room for every joy." Raymond is a conscientious lad. With him, the Last Clear Chance is the Versailles interurban. It gives him an excuse to leave early and arrive late. His reasoning has depth and logic. You couldn't imagine a more thorough student of the Code and Statutes. (We'll catch that last car home after that.)

Raymond Anthony Schoberth (March 25, 1895 - November 3, 1918) was born in Versailles, Kentucky to Anthony Schoberth and Elizabeth Vogler. Schoberth worked on the family farm in Versailles after receiving his LL.B. from the College of Law. Schoberth attended an officer's training school at Fort Benjamin Harrison. He served as a lieutenant in the United States Army during World War I, arriving in Europe in July 1917. He was killed in action on November 3, 1918 in France.