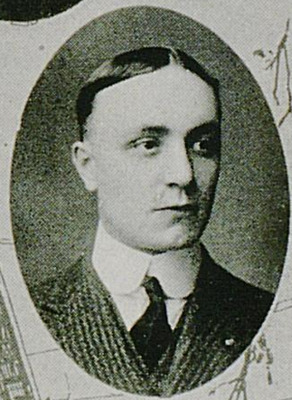 "Put this in your pipe and smoke it." "Comet" is one of the few students who finds so much solace in his jimmy pipe that he has to carry two in his pockets to keep the supply equal to the demand. He is an authority on "Cassidisms" and so far as we know he has only one fault--he HAS to go to Versailles EVERY Saturday and Sunday. Why? No one knows.

Younger Evans O'Neal (December 21, 1892 - November 17, 1941) was born in Woodford County, Kentucky to William Merritt O'Neal and Jean Evans. O'Neal worked with his father, a hotel proprietor, before and after graduating from the University of Kentucky. O'Neal would work as a manager in his father's various hotel operations, including those in Bardstown and Cave City. His other employment included managing tobacco warehouses and operating hotel cafés. O'Neal would return to Lexington in the late 1930s to work as an auto insurance adjuster. He married Helen Fichter in 1920.