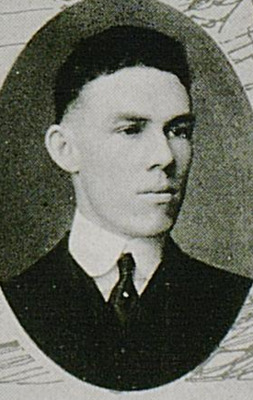 "Praise God, I'm not bound by the wiles of some elf For I could not love the sweet Venus herself." "Maj" is the most unassuming chap in school, so unassuming in fact, that he is known to hardly half the Senior class, yet this simple fact is evidence of his sincerity of purpose. In his Junior year he won the prize offered by the Callaghan Book Co. to the law student attaining the highest average for the year.

Major Wesley McBrayer (April 19, 1893 - October 30, 1967) was born in Anderson County, Kentucky to Louis McBrayer and Sallie Hicks. After receiving his LL.B., McBrayer worked on the family farm and also as a merchant with his father-in-law, J.C. Van Arsdell. He later practiced law in Lawrenceburg with his brother, Jasper J. McBrayer (LL.B., '18). McBrayer served as a police judge for Lawrenceburg for over 20 years. McBrayer married Emma Lee Van Arsdell.