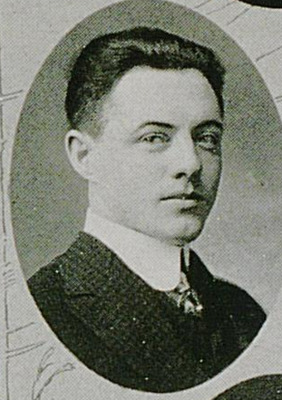 "Who was Blackstone?" "Why-er-he-er-was Blackstone." The only inconsistent thing about Jimmy Monroe is the fact that he is at one and the same time a good Democrat and a Prohibitionist. Jimmy Monroe is an ardent student of the distinguished personage from whom he gets his middle appendage, and whenever in want of a construction of the doctrine that made Monroe famous seek out Jimmy.

James Monroe Morris, Jr. (September 27, 1891 - September 18, 1961) was born in Christian County, Kentucky to James Monroe Morris, Sr. and Mary Susan Stokes. Morris took an additional year of post-graduation work at the University of Kentucky after receiving his LL.B.. He then practiced law in Louisville with C. L. Williamson. In 1917, he enlisted in the Army and served overseas in World War I. Morris continued to serve with the Army in Germany at the war's end. He later worked as an advisor and instructor for the State National Guards in Hawaii and Montana. Morris also became an ROTC instructor and taught at several universities including the University of Florida. Morris served on the tribunal at the Buchenwald war crimes trial in 1947 after serving in World War II. He would later serve as a juror for the Nuremberg Trials. Morris married Edna Blanche Parker in 1918.