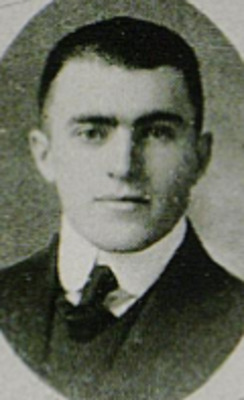 "Speech is silver, silence is golden." "Mac" comes from Iowa, but two years here have made a "State" man of him anyway. Despite a few misconceptions of the law already intrenched in his mind, "Mac" is an athlete; to see him dash through tackle, you might not believe that he ever ploughed corn back in Iowa. He is one of the best old scouts in the world.

Marion Robert McCaulley (June 4, 1892 - July 21, 1946) was born in Lake City, Iowa to Francis Marion McCaulley and Margaret Barr. McCaulley practiced law in Lake City in partnership with John W. Jacobs--he served two terms as the county attorney, and was the city attorney for several years. McCaulley was elected to the Iowa state legislature in 1924 as a representative for Calhoun County. McCaulley married Blanche Hinton in 1915.