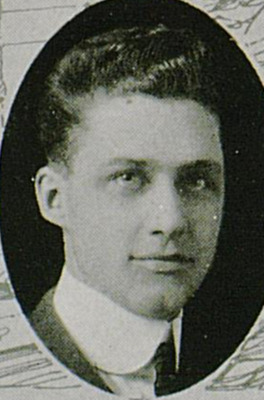 "The first thing we do, Let's kill all the lawyers."--King Henry IV.

The Berkshire Class wins another Blue Ribbon in the Stewart entry. The class has missed the old boy since he has been in Texas most of the time, but Patt Hall "misses him most of all." No lawyer made a better record in the department than did he. He is an all 'round success.

William Stewart Berkshire (February 16, 1891 - July 3, 1986) was born in Rising Sun, Indiana to William Terrill Berkshire and Rosella Stewart. Berkshire moved to El Paso, Texas after graduating from the University of Kentucky. He practiced law there and eventually served as a District Attorney and a corporation court judge for the city. In 1925, Berkshire was appointed as an acting United States commissioner. He would later work as a deputy commissioner for the United States internal revenue alcohol tax unit in Washington, D.C.. In 1946, Berkshire was appointed assistant commissioner of internal revenue. Berkshire transferred to Los Angeles, California in 1948 and was later appointed the Bureau of Internal Revenue district commissioner for California and Hawaii. Berkshire was married three times. His wives were Elizabeth Sarah Barricklow (1917-1936), Helen Douthitt Bridges (1939-1942; 1946-1961), and Irma Dawson Armstrong (1963-1986).