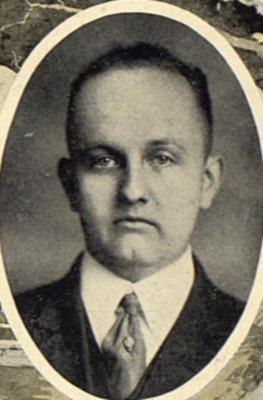 "He wielded the scepter of authority with the dignity of a king." "Doc" wears a countenance of nobility and has the disposition of a lion. His presence commands attention, his words afford inspiration and the gestures of his hands impel to action. The beauty of the law is not the only aesthetic aspiration of "Doc's" soul, for the most conspicuous decoration in his heavenly domicile is the portrait of a Texas maid who sits in a dream of revery and watches over him like a guardian angel. His most constant and delightful occupation is to gaze into her eyes, and through her eyes into the future.

Henry Townes Hardin, Sr. (May 3, 1892 - November 8, 1937) was born in Beech Grove, Kentucky to William M. Hardin and Nellie Townes. Hardin moved to Evansville, Indiana after receiving his LL.B.. In 1920, Hardin's brother Edward received his LL.B. from the University of Kentucky College of Law. The brothers began the Evansville firm of Hardin & Hardin with Henry as the senior partner. Henry Townes Hardin worked at this firm until his death in 1937. Hardin also served terms as Vanderburgh County prosecuting attorney and as Evansville city attorney. Hardin married Frances Jane Smith. Their son, Henry Townes Hardin, Jr., attended UK law but died in his senior year.