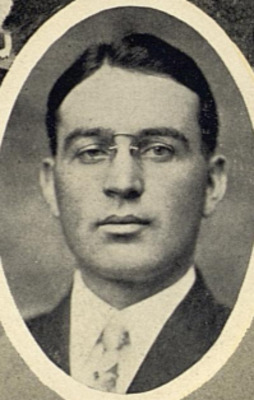 "He who rules less through force of authority than by the example he sets, procures obedience through the admiration of his followers." Everybody loves C. C, and the girls simply rave about his complexion, but he has never found much time to devote to his feminine admirers. C. C. has been about the world quite a little and seen much of humanity's faults and frailties. He says that "He who would designate the spots on his brother's character, must first show his own to be spotless." As President of the Henry Clay Law Society he has furnished himself an example that every member is proud to imitate. He possesses a rare sense of justice and a profound knowledge of the law which will some day establish him on the Bench, we do believe.

Charles Chester Wilson (November 6, 1886 - June 27, 1944) was born in Hart County, Kentucky to William Robert Wilson and Emma Cettie Reynolds. Wilson moved to Meade, Kansas after graduation. He practiced law and served as a county prosecuting attorney. Wilson was one of Kansas' 5th district's delegates to the 1944 Republican National Convention. Wilson suffered a heart attack on the convention floor on June 27 and died. Wilson married Velma Neville.