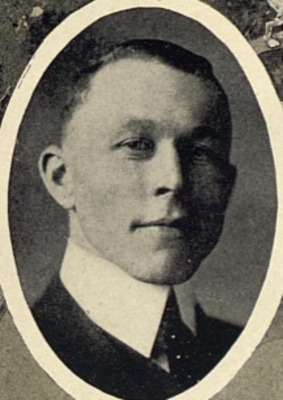 "Some men are born great, while others achieve greatness." During the year of 1911 the said Ward Collins Yeager aboarded the train at Warsaw. Ky., and was railroaded to the Queen City of the Blue Grass, for the purpose of entering the College of Law, where he could grow into a stateman and legal adviser, which according to the facts and circumstances, concerning his conduct, pleasurably, magnanimously and wilfully done. Since his arrival here he has made himself famous by his political jokes and witicisms. These marks of natural genius do not surpass those of his acquisition and we verily believe that he is destined to be a leader of mankind.

Ward Callis Yager (July 2, 1891 - February 24, 1967) was born in Oldham County, Kentucky to Junius Brutus Yager and Elizabeth Alma Blackerby. After receiving his LL.B. in 1914, Yager practiced law in Lexington in the office of W. C. G. Hobbs for 18 months. He then worked for the city of Lexington as the mayor's secretary. Additionally, Yager worked as a special judge in various Fayette County courts. In 1919, Yager returned to Warsaw, Kentucky to practice law. He was then appointed Gallatin county attorney in 1920. Yager would later serve as Gallatin Circuit Judge for 27 years. Yager married Ruth M. Graham.

*Sometimes spelled 'Yeager'. 'Yager' has been chosen as it is the name on Mr. Yager's tombstone.