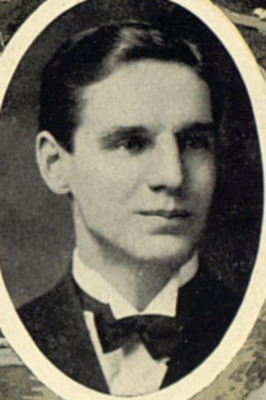 "I live in dreams. The melody of my voice enchants my soul." Once on a ravishing moonlight night while Covington's guardian angel slept at his post, this carolling, somnambulistic individual stole away and wandered into our midst, where he is still carolling and somnambulating. How beautiful must be this dreamer's world of melodious revery and fleeting visions! It is the lamentable Tragedy of Dreams that they rarely come true, yet we cannot but believe that Piggy's will some day somehow be realized, perhaps in a cottage by the sea where he can sing the livelong day to the murmuring of the eternal waves.

William Jasper Sandford, Jr. (January 8, 1891 - April 2 or 3, 1986) was born in Cincinnati, Ohio to William Jasper Sandford and Jessie Clark. Sandford began working as a truancy officer for Lexington city schools after receiving his LL.B. Sandford later worked for the TVA as a recreation specialist in several different states. After retiring from the TVA, Sandford began working for the Knoxville, Tennessee Recreation Bureau in 1956. In 1960, Sandford became the director of the Knoxville Senior Citizens Recreation Center. He served in this capacity until his retirement in 1971. Sandford married Margaret C. Cassidy in 1915.