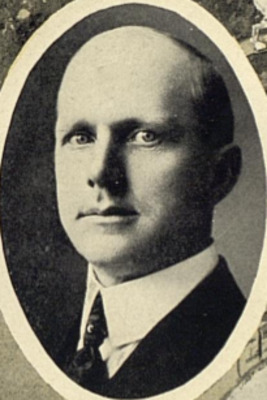 "The strength of a man's brain is not measured by the number of capillaries on his scalp." Parks is the foster father of the class, being the most elderly, settled and dignified. He began his life distilling truth to the youth of Kentucky, but found that there was more need of law than learning and rushed to Judge Lafferty to show him the way to Blackstone. To know him is to love him, to be with him is to strive to emulate his life. We are glad he joined us and hope that his clients will be as numberless as his friends. If he displays such legal prudence at the Bar as he has been wise and scholarly in class, the world will recognize him and join with us in doing due credit to his name.

Frank Rice Parks (September 9, 1878 - February 16, 1916) was born in Missouri to Ebenezer Rice Parks and Naomi Challen. Parks was the principal of the Harrison School in Lexington, Kentucky between 1904 and 1916. Parks continued in this role after receiving his LL.B. from the University of Kentucky in 1914. Parks died from complications after surgery in 1916. Parks married Onie Uppington.