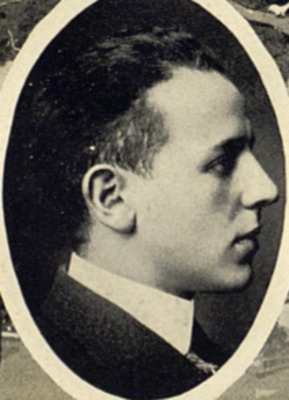 "A little man, but a large mind." Here we have a product of the Queen City of the Blue Grass of whom she, as well as we, are justly proud. If he hadn't been quite so cute and petite he wouldn't have had so much trouble convincing people that he is really a Senior, but we should bibble! He's there with the goods--likewise the girls--and holds the original patent on the Spearmint Dance. This diminutive chap is skilled in many, many ways, but above all in argumentation, and if he sways juries as easily as maidens' hearts prosperity will ever clamor at his door.

Harry Benjamin Miller, Sr. (June 16, 1893 - February 20, 1951) was born in Lexington, Kentucky to Isadore Jay Miller, Sr. and Jennie Faller. Miller attended the University of Kentucky College of Law with his brother, Jesse Isador Miller. The brothers practiced together in Lexington in the firm of Miller & Miller after graduating in 1914. The firm was dissolved when both brothers went to serve during World War I. Harry Miller returned to Lexington at the end of the war and restarted his practice. Miller served as Lexington city attorney for several years and represented the city in the Kentucky General Assembly. Before his death in 1951, Miller practiced with his son, Harry B. Miller, Jr., in Lexington. Miller married Ann Brown Walcutt in 1923; however, the couple had divorced by 1930.