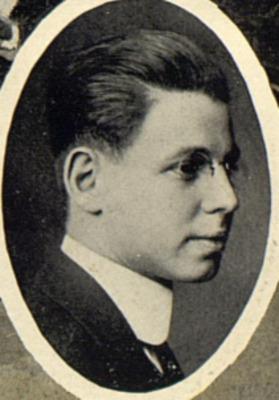 "For behold a little man may prove a worthy opponent." Jesse's talents are so legion that it is hard to say just what constitutes his forte. While he possesses an artistic temperament he love the zest of an oritorical conflict and the exhilaration that comes with an athletic tournament. He was a quiet, reticent little chap until he met the renowned author of "Uncle Tyty." He is given to meditation on problems that would stagger the great philosopher Kant and thinks nothing of writing a brief, a petition, and a discourse on "ultra vires" all at the same time. It is not too much to prophesy that he will take high rank in the legal profession at no distant date.

Jesse Isador Miller (July 12, 1891 - November 9, 1949) was born in Lexington, Kentucky to Isadore Jay Miller, Sr. and Jennie Faller. Miller attended the University of Kentucky College of Law with his brother, Harry Benjamin Miller. The brothers practiced together in Lexington in the firm of Miller & Miller after graduating in 1914. The firm was dissolved when both brothers went to serve during World War I. During the war, Jesse Miller was commissioned as aide de camp for Provost Marshal General Crowder and was later appointed as a judge advocate. After the war, Miller moved to Washington, D.C. and worked for the Bureau of Internal Revenue. Additionally, Miller entered private practice in the area. Miller rejoined the United States Army in 1942 as the associated director of the School of Military Government in Virginia. Miller married Florence Belle Glaser in 1923.