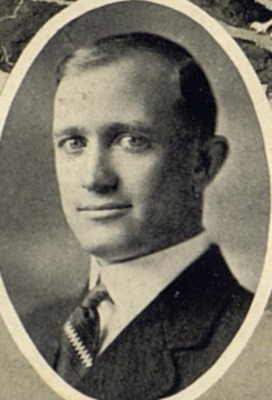 "He laughs wherever he goes; His merriment shines in the dimpling lines That wrinkle his hale repose." While it is true that man is the noblest work of God, yet we contend that the individual who wears upon his face a continual sneer and is ever wont to criticize instead of praise, is but little above the beast. The individual who smiles and keeps before him a lofty ideal instead of catering to his baser self comes nearer to being the man defined above. The greatest of all philosophers has truly said, "He that ruleth his own spirit is greater than he that taketh a city." We admire the keen wit and cutting sarcasm of the cynic, but we love the man who can smile--that's George.

George Enoch Jones (February 17, 1887 - May 22, 1946) was born in Union County, Kentucky to Eddie Jones and Josie Cross. After attending the University of Kentucky, Jones practiced law in Morganfield until his death in 1946. Jones married Alice Isabelle Herndon.