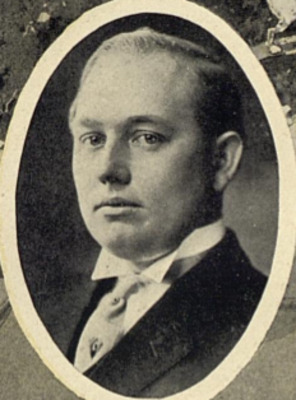 "He wears a smile from year to year." "Cupid" came from somewhere out in the brush where for several years he had been an efficient school master. We have it from his own mouth that he never began the day's work without reading from the Bible and quoting the Lord's Prayer. After entering here he soon convinced his associates that opposition to him meant worthiness of steel. He is possessed of rare oratorical talents and it is child's play for him to pick to pieces the ablest argument. A most congenial lad, and one of whom it cannot be truthfully said: "Nobody loves a fat man."

William Henry Jones (June 8, 1888 - ?) was born in Calloway County, Kentucky to James Jones and Lucretia Shrader. He worked in Calloway County as a public school teacher before attending the University of Kentucky. After graduation, Jones worked in Murray, Kentucky as an attorney. Jones did not work as a lawyer for long--he began teaching at the Business College in Bowling Green at some point before 1920. Jones eventually moved to Hillsborough, Florida where he was the manager of an insurance office. Jones married Lucille Grogan.