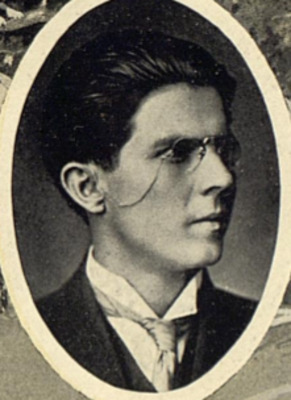 "So he left the plains of Kansas and their bitter woes behind him. Slipt off into Kentucky where the statesmen all are born." This youthful lad, bold and strong, with the impetuous spirit of the winds that howl across the plains of his native western state conceived the idea that he was born to tread the flowery path that Blackstone, Jefferson, et al., had trodden before him, so straightway hitching his ambition to a star, he laid aside his lasso, sombrero, and leather trappings, donned the raiment of eastern civilization, and caught a train for Kentucky. When he returns to that breezy little hamlet of Great Bend that he loves so dear, the citizens thereof will soon learn that the star of his ambition did not beckon him in vain.

Tedford Benjamin Kelley (August 12, 1889 - August 21, 1968) was born in Great Bend, Kansas to Ben Jerrel Kelley and Nancy Ellen Cochran. Kelley was public school teacher in Great Bend before attending the University of Kentucky. Kelley returned to Great Bend after receiving his LL.B. He was a partner in the firm of Osmond, Cole & Kelley and was later associated with Kelley, Conner & Opie. In addition to his practice as an attorney, Kelley served as a Selective Service appeal agent between 1940-1965. Kelley served in the United States Army Ordnance Department during World War I. Kelley married Jessie Dodge in 1918.