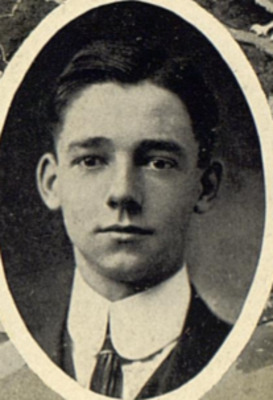 "His attenuated stature is no more drawn out than the fine-spun thread of his argument." "Kimmy" is the managerial paragon of his class, having attended to the business end of nearly every enterprise in Lexington from the Colts to the Y. M. C. A. Basketball Team. And at the same time he has managed to make an excellent record in his studies, speaks for his sterling qualities. It broke Kimmy's heart when he failed to get a game with the Varsity this year for his basketball team. He believes yet that he would have won in a walk. One of the unsolvable mysteries in his Senior year is why he left the Pan-Hellenic dance so early in the evening.

Henry Clay Kimbrough, Jr. (September 1, 1893 - August 3, 1977) was born in Nicholas County, Kentucky to Henry Clay Kimbrough and Nannie McNew. After graduating from the University of Kentucky, Kimbrough worked as a foreman for Ligget & Myers, a Lexington tobacco company. Kimbrough moved to Los Angeles, California between 1920 and 1930 where he worked as a stock broker and investments manager. Kimbrough married Elma Berenice Caudill in 1921.