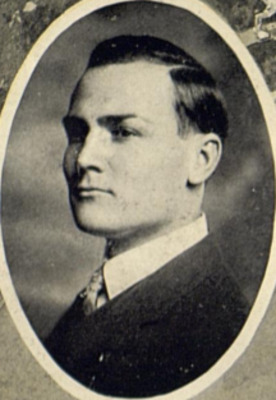 "Man is prone unto sin, even as the sparks fly upward." This man missed his calling, due to his animosity for T. U., yet we expect great things of him, for he tempers human justice with abstract justice, and when the application of legal principles seems conscienceless he disregards all rules and proves his argument by biblical phrases, quoting Paul as authority. He comes from aristocratic Richmond, and has the added distinction of having been a faithful and efficient subject during the reign of "She Pat."

Taylor Nathan House (January 15, 1891 - May 1, 1985) was born in Madison County, Kentucky to Thomas House and Martha Short. House began practicing in Lexington after receiving his LL.B. in 1914. House served as chief U.S. enforcement attorney for the Lexington district for many years. He was a veteran of both World Wars and achieved the rank of major in the Army Air Corps. House married Geneva Adams.