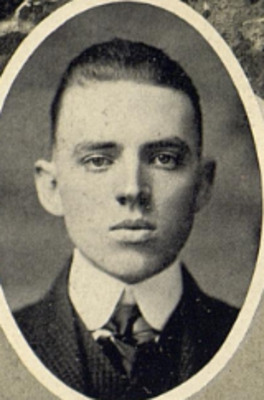 "And the lawyers smiled that afternoon when he hummed in court an old love tune." Since the Fall of 1912 when "Count" first entered our midst there has been a perceptible increase in the flutterings of the hearts of the fair damsels of the University. But his talents arc not alone confined to heart breaking, for he showed to the people of the University that he is an actor of some ability from the way in which he acted the part of Coach in the "College Widow." "Count" is a good student and when he-starts practicing law he is going to make the rest hustle to keep up with him.

Guy Alexander Huguelet, Sr. (January 1, 1891 - July 23, 1955) was born in Charleston, South Carolina to George Arthur Huguelet and Mamie Melchers. Huguelet practiced law in Lexington after graduating from the University of Kentucky. He served as assistant corporation counsel for Lexington between 1924-1930. Prior to attending UK, Huguelet had worked in South Carolina for the Southern Railway System. In 1926, he and others organized the Consolidated Coach Lines corporation--Huguelet served as secretary and corporate counsel for this venture. This business later became the Southeastern Greyhound Lines. Huguelet served as president and, eventually, board chairman for Southeastern Greyhound.

Huguelet was highly involved in the University of Kentucky after his graduation. He was appointed to the Board of Trustees in 1948 and became chairman of the Executive Committee the next year. He also served as a director of the University Athletic Association.

Huguelet was married twice. He married Mary Lovell Whitney in 1917. After her death in 1928, Huguelet married Angeline McCormick DeLong in 1929.