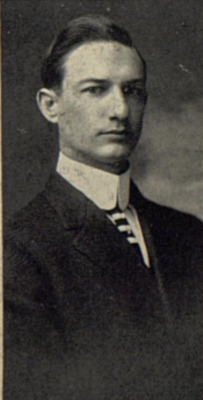 "An ounce of pluck is worth a ton of luck." The aforesaid James Robinson Bussey, hails from the "Pennyryal District of Kentucky." You might not believe it, but he has been somewhat of a globe trotter. First he attended the John Marshall Law School of Chicago. Wishing to compare the adhesive power of the Law in the North with the Law in the South, he spent a year at Vanderbilt. However, he decided that a happy medium is best in all things, so he came to his native state to spend his Senior year at Kentucky State. It sticks to him here, and he soon takes the reins and says "come on boys." He is small of stature, but will make a much larger catfish, "Swunk-up" to stay by his side.

James Robinson Bussey (February 26, 1887 - October 16, 1949) was born in Hickman County, Kentucky to Charles Earl Bussey and Edna Elizabeth Spicer. Bussey first studied at Marvin College in Clinton, Kentucky. He worked in several enterprises before attending the University of Kentucky including working as a switchboard operator and a secretary. Bussey first studied law at the John Marshall Law School and then at Vanderbilt University. Bussey would receive his LL.B. from UK in 1913. Bussey practiced in Paducah after graduation until 1914, when he moved his practice to Forrest City, Arkansas. In 1921, Bussey moved to St. Petersburg, Florida where he first practiced with Freeman Lane. Bussey then helped found the law firm of Bussey, Mann, and Barton. This firm then became Bussey, Mann, Simmons and Fielding; followed by the firm of Bussey, Mann, Simmons and Harrison. Bussey married Frances Mann in 1913. The couple had five children--two of their sons, Robert and William, became lawyers and headed their father's firm after his death in 1949.