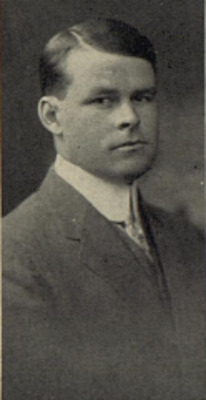 "Who conquers me shall find a stubborn foe." James Knox Polk South, a product of the "Blue Grass," hails from the capital city, in Franklin County, He took his preparatory work at Excelsior Institute, Jett, Ky., and after spending some time in the Wild and Woolly West, as a "Buccero" he entered the Law College of the Transylvania Univ. However, he is now putting on the finishing touches at State Univ. Having had some of the experiences of "Teddy" we bespeak for him a career not unlike that of the "Rough Rider."

James Knox Polk South, Jr. (January 1, 1891 - June 9, 1947) was born in Franklin County, Kentucky to James Knox Polk South, Sr. and Eudora Gray Lindsay. After graduating from the Excelsior Institute (an academy started and operated by his parents), South moved to San Diego, California where he worked as a cattle buyer. South returned to Kentucky to attend the College of Law and received his LL.B. in 1913. He then moved back to Franklin County and began working as a lawyer in Frankfort. South also continued operating the family farm in Jett. South served a term as the national judge advocate of the American Legion and was a veteran of World War I. South married Alice Alexander Seely in 1918.